The IES – A Short History

The International Eosinophil Society, Inc. is now a robust organization with a constitution, an excellent organizational structure, a committed executive group and an interactive membership. All of us are eagerly anticipating our next meeting in Oxford, United Kingdom to learn more about the eosinophil but also for the camaraderie and interactions with our colleagues.

Our society evolved rather gradually until it crystallized at a 1999 meeting in Lund, Sweden. The society’s evolution paralleled increasing interest in the eosinophil, its functions and its role in physiology and disease. A search on “eosinophils” going back 100 years indicates that the numbers of citations increased from an average of approximately 2 per year from 1911 until 1940 to over 6000 per year from 1996-2010 (a graph of the number of citations per 5 years is shown in the figure). 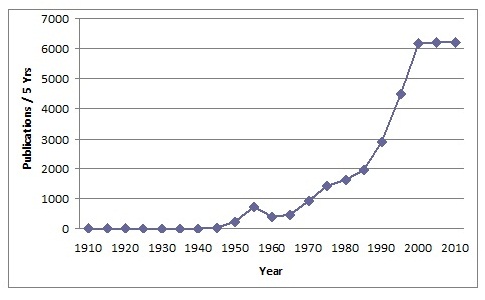 As interest in the eosinophil increased, a series of meetings occurred with the eosinophil as the central focus. A meeting at Brook Lodge, Michigan, in 1981 commemorated the 100th anniversary of the eosinophil’s discovery by Paul Ehrlich (at least approximately, because Ehrlich likely discovered the eosinophil in 1879). This was followed by a meeting in Japan, also in 1981, on the immunobiology of the eosinophil, and other meetings in Switzerland and Brazil, to mention a few. However, it was not until 1999, at a meeting in Lund, Sweden, that Per Venge assembled a group of eosinophilophiles to initiate a new society, the International Eosinophil Society.

The first executive committee included Per Venge as the president, Steven Ackerman, Judah Denburg, Paul Foster, Francesca Levi-Schaffer, Redwan Moqbel, Kiyoshi Takatsu and Tim Williams. However, the progress of the Society was not smooth. Redwan Moqbel and Peter Weller struggled and succeeded to obtain support for the first meeting in Banff, Alberta, in 2001, and, at the last minute, one poster session was canceled because of insufficient funds. Moreover, the meeting tone was grim because of a recent publication implying that the eosinophil was not an important effector cell in asthma.

Redwan Moqbel, as the president and Steven Ackerman took responsibility for the second meeting in 2003 at Snowmass, Colorado, a much more upbeat meeting entitled “Eosinophil (re Phoenix) Rising,” and Amy Klion organized a pre-meeting on eosinophil-associated disease. These pre-meetings are now a staple of the overall meeting, and the interactions among clinicians resulted in collaborative studies well exemplified by the project on the treatment of the hypereosinophilic syndrome with mepolizumab.

The third meeting in 2005 at Bern, Switzerland, was organized and successfully managed by Hans Uwe Simon. At this stage, the structure of the Society was still rudimentary, and Steven Ackerman, as our secretary-treasurer, was a bulwark of the organization. Even at the meeting in Snowbird, Utah, in 2007, we were still working on establishing a constitution. These issues remained a problem in 2009 at the meeting in Bruges, Belgium, organized by Florence Roufosse and Monique Capron. However, since Jamie Lee assumed the presidency in 2009, several of the nagging issues have been resolved, in part through the services of a professional management company, Executive Director, Inc. We now have a constitution and by-laws, are incorporated, have a useful website, and we are acquiring sufficient finances to assure our stability over the next several years. The meetings are a beehive of activity as we interact with colleagues, speculate on new concepts and critique established beliefs.